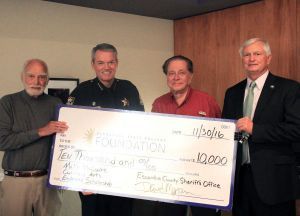 In June 2015, the over $200,000 scholarship endowment was established at the college with contributions from more than 200 Pensacola area residents and businesses. Interest from the endowment funds annual scholarships for Molly McGuire Culinary Arts Endowed Scholars. Also, the college’s culinary arts dining room was renamed the Molly McGuire Culinary Arts Dining Room.

“It is our policy to take drug forfeiture money from the seizure of cash and property of those convicted of drug offenses and return it back into the community,” he explained. “I was approached by Mr. (Jim) Reeves and Mr. (McGuire) Martin about helping underserved students and those in need enrolled in Pensacola State’s culinary arts program.”

In fall 2015, the first scholarships were distributed to several culinary arts students.

“It makes us feel good here at Pensacola State to know that Sheriff Morgan recognizes the way this college changes lives,” Meadows said. “Many of our students have full-time jobs, are parents and caregivers. But they are willing to make sacrifices to earn a degree or certification because they realize education is the pathway to a better life.”

McGuire Martin said his late wife would be “so, so pleased” with the gift.

“This donation will help some young people further their education. It is money well-spent by the sheriff’s office,” Martin said. “I want to thank Sheriff Morgan for remembering Molly and the students here at the college. Molly really loved Pensacola State.”
Jim Reeves, a longtime Martin friend and real estate attorney, spearheaded the initial fundraising efforts for the endowment following Molly “McGuire” Martin’s death in 2014.

“Culinary support staff is so important to our local restaurants, and employees who work those jobs mattered to Molly. She started out as a waitress at McGuire’s,” Reeves said. “I want to say thank you to Sheriff Morgan for the $10,000 donation. This is an outstanding way to honor Molly McGuire.”

Morgan said the donation was part of the sheriff’s office diversionary plan which serves as an incentive for young people to continue their education.

“This was my first time partnering with Mr. Reeves and Mr. Martin but the sheriff’s department plans to make more donations to Pensacola State’s culinary arts program in the future,” he said.