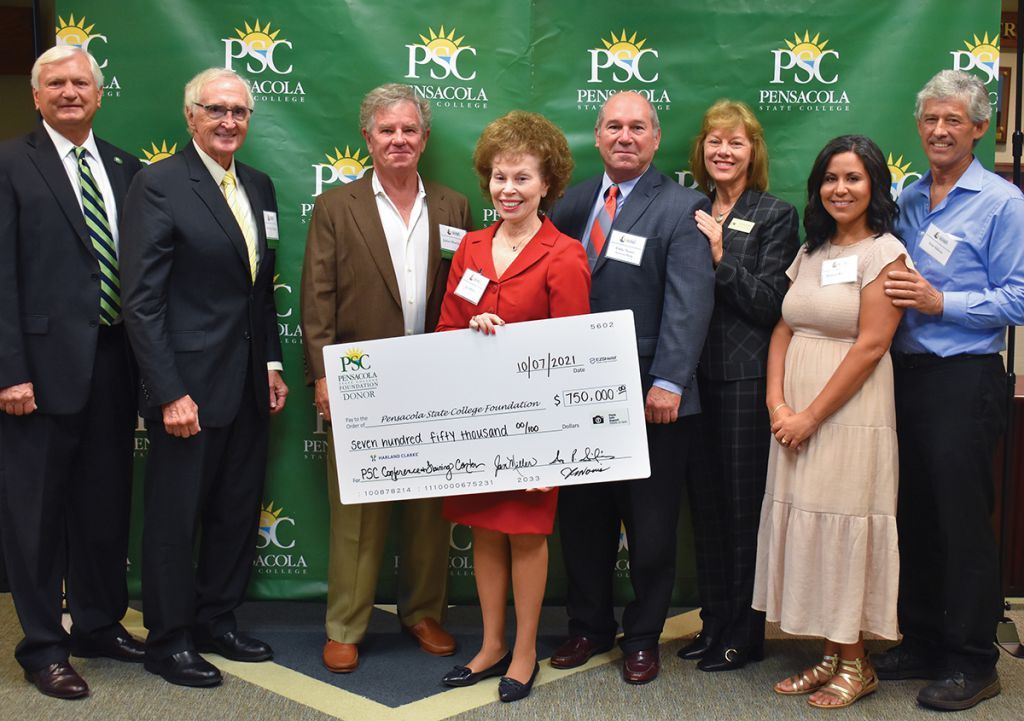 A proposed Pensacola State College Conference and Training Center has more than $750,000 in pledges from some of the institution’s most loyal supporters.

PSC officials announced the financial donations on Thursday, Oct. 7, at a press conference in the Dona and Milton Usry Board Room on the Pensacola campus.

The PSC Conference and Training Center is a high priority of the College due to the critical need for dedicated meeting space for the College and the community, said PSC President Ed Meadows. The approximately 13,000-square-foot planned conference and training center will house student activities such as job fairs and provide meeting space for faculty and staff seminars and workshops.

Also, the facility will provide meeting space for the College’s Nonprofit Training Center for Excellence, as well as provide a venue for the many community organizations that seek to host events on campus, said PSC President Ed Meadows.

“We have community groups and state groups asking almost every week to be on our campus for meetings and services,” Meadows said, noting that the Student Center, often used for events, is not designed for that purpose. “If you look at the number of requests, the only time we have for the community is when classes aren’t being taught.”

Meadows said the proposed conference and training center would be a perfect fit for job fairs, seminars and even legislative meetings.

He then thanked the numerous donors who have contributed to the project, including lead gift donors Jan and Ron Miller.

“We are fortunate to have supporters like Jan and Ron Miller who have supported the College for many years. Jan Miller has served on the WSRE and PSC Foundation Boards. She is currently a member of the PSC Foundation Capital Campaign Cabinet and is the lead on this project,” said Andrea Krieger, the College’s executive director of institutional development. “In October 2019, the couple demonstrated their strong commitment to education and PSC when they named Pensacola State College the beneficiary of a $2.4 million Charitable Remainder Unitrust.”

Jan Miller said the conference and training center will be beneficial to the entire Pensacola community.

“No matter what your passion is or where you heart is,” Miller said, “I think we can find a reason for the use of this conference and training center that will fit your heart and fit your passion.”

Donors names will be engraved on the lobby wall of the planned conference and training center. So far, those donors include:

Community partners are excited to be involved in making the conference and training center a reality.

“Synovus is proud of our affiliation with Pensacola State College,” said Eddie Norris, Synovus Market Executive. “This school is doing great things for the community and we are proud to be a small part of the planned PSC Conference and Training Center and the College’s future.”