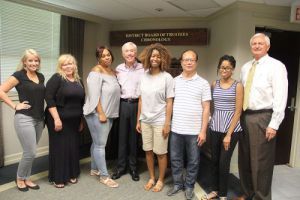 Shamira Tyler wants to be a registered nurse. Megan Weatherspoon aspires to be a physical therapist. Jolie Sutter dreams of becoming a graphic artist.

This fall, all three are enrolled in Pensacola State College because Sandy Sansing stepped forward to make their goals a reality.

Tyler, Weatherspoon and Sutter are among 16 Pensacola State students who have received Sansing Universal Scholarships. Each scholarship will cover tuition, fees and books up to $1,500. Along with demonstrating financial need, recipients must have a 2.0 grade point average and be a U.S. citizen or resident alien. The scholarships were awarded during the 2016-17 and fall 2017 academic years.

During a luncheon on Thursday, Oct. 12, Sansing, a 1967 Pensacola Junior College graduate, told the recipients the scholarships were an investment into their futures.

“I’ve been blessed, I want you to be blessed,” Sansing said as he offered life advice to the students during the informal meetup.

“Don’t spend the rest of your life looking over your shoulder wishing you had done something. Go for your goals and if you fail, pick yourself up and try again,” said Sansing who started out as an accountant in Opp, Alabama.

“I can’t thank Sandy enough for all he does for Pensacola State and our students,” Meadows said. “Not only does he offer financial support to our students but he also provides life advice to them.”

Shamira Tyler was extremely thankful for her scholarship.

“Without Mr. Sansing’s generosity, I would not be able to go back to school to earn my BSN,” said Tyler, who graduated in May with her associate degree in nursing.

“Being a nurse has been a lifelong dream of mine, and Pensacola State is helping make it a reality. I really appreciate Mr. Sansing for investing in my future. When I am established in my career, I hope to be able to reach back and help students – just as he is doing.”