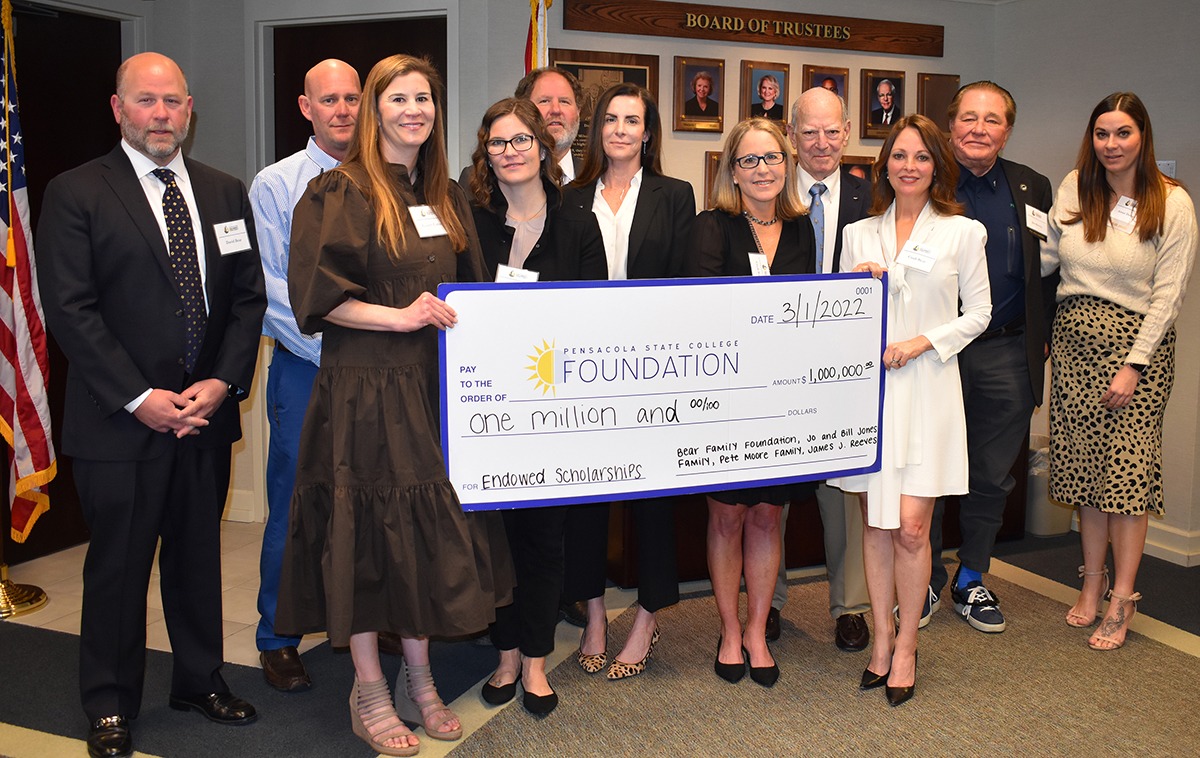 Four prominent and generous Pensacola families have collectively given $1 million to fund scholarships for STEM-related programs at Pensacola State College.

The Bear, Jones, Moore, and Reeves STEM Building was announced at a press conference held Tuesday, March 1, in the Dona and Milton Usry Board Room on the Pensacola campus.

All of the donors — the Bear Family Foundation, the Jo and Bill Jones Family, the Pete Moore Family and James J. Reeves — established the endowed scholarships to support PSC students.

“We want to thank these families and acknowledge their commitment to and support of the College and our students,” said PSC President Ed Meadows of the donations.

“These families have a long and storied history with Pensacola State College. Time and time again, they have supported the College and our students in numerous projects and endeavors.”

The scholarships established by these four families include:

Their scholarship supports full-time students who have financial need and are enrolled in technology and cybersecurity programs. Students must have a 2.5 or higher grade point average.

In support of the College’s Truck Driver Training Program, the Bear Family also donated a truck for students to drive during training.

Recipients must be pursuing a nursing or health science degree or certificate, demonstrate financial need, maintain a minimum 3.0 GPA, be a United States citizen or resident alien, and be enrolled on a part-time or full-time basis. Students will receive up to $1,000 per year.

After moving to Pensacola in 2008, Jo quickly became a mainstay in the local community and volunteered countless hours in organizations such as The Pensacola Symphony Guild, The Panhandle Tiger Bay Club and Impact 100.

Jo Jones was an extremely dynamic and intelligent woman whose work experience ranged from milking cows on a farm to becoming one of the first female partners of the worldwide consulting firm, Accenture.

Benefits residents of Escambia or Santa Rosa County who are pursuing education in a trade program and demonstrate financial need. Recipients must be a United States citizen or resident alien and may be enrolled on a part-time or full-time basis. Students will receive up to $1,000 per year.

Pete Moore was the founder of Pete Moore Automotive. Before his death in 2019, he was a recognized business leader and supporter of local charities.

In September 2018, he donated a 2017 Chevrolet Impala to the Gulf Breeze Police Department for Gulf Breeze Elementary School’s D.A.R.E. program.

His business also sponsored numerous charities, including the Council on Aging of West Florida, the Panhandle Charitable Open and the Leukemia and Lymphoma Society, among many others.

Pete Moore donated two new trucks to the beach safety program in 2004 — and continued replacing them every other year, free of charge.

James J. Reeves is a Pensacola real estate attorney, developer, and former politician who served in the Florida House of Representatives and on the Pensacola City Council.

He is founder of the Irish Politicians Club and has been instrumental in the success of many generations of Pensacola leaders.

Reeves was selected for the top spot in the 2018 Power List, just one more accolade in the litany of honors that tell a story of his impact.

He helped establish the Molly McGuire Culinary Arts Endowed Scholarship and uses his influence to ask each member of the IPC to donate $100 annually to grow this fund.

Reeves is active on the boards of the Institute for Human and Machine Cognition, Pensacola Cultural Center, Pensacola Jaycees, Gulf Breeze Rotary and the Downtown Improvement Board.

He serves as a trustee for the Gonzalez United Methodist Church and the Community Maritime Park Associates.

Mr. Reeves is in the process of finalizing the criteria for his scholarship.

“Over the years, these families have supported our community and Pensacola State College in countless ways,” said Margie Moore, PSC District Board of Trustees chair. “We are so grateful for these scholarships that will benefit so many students.”

Site work on Phase II of the 45,000-square-foot STEM building began in January.

Phase I — the Baars Technology Building — officially opened in April 2021. The $15 million 23,839-square-foot building is currently home to STEM programs such as cybersecurity, computer science, and math.

Phase II also will house cybersecurity, math, advanced technology, and other STEM programs. A third-floor connector will link the two buildings and a Phase II rooftop terrace is part of the project.

“Our cybersecurity programs are among our most rapidly-growing degree programs,” Meadows said, adding a groundbreaking for the Phase II building is set for later this Spring.

Meadows said the Baars Technology Building would not be closed during the Phase II construction. The project should be finished in 18 to 20 months, Meadows said.

Reeves was the first to announce his gift and was instrumental in recruiting the Bear, Jones, and Moore families to endow scholarships.

“It’s easy in my mind’s eye to raise money for Pensacola State College because Dr. Meadows has done such a great job here,” Reeves said. “This was his idea, not mine.”

Then, Reeves looked at members of the Bears, Jones, and Moore families.

“If not for you, this would not have happened,” he told them. “We’re all equal partners in this.”