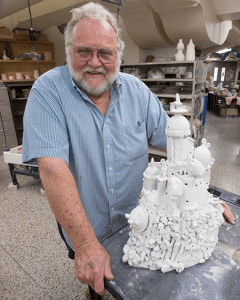 Bill Clover passed away in May of this year, but the beloved Pensacola State College visual arts professor will still impact the lives of future students.

The Bill Clover Memorial Auction will be held at 6 p.m. Thursday, Oct. 25, in the Charles W. Lamar Studio on the Pensacola campus. Funds from the auction will go toward the establishment of the Bill Clover Endowed Scholarship.

Known for his ceramic pottery, Clover worked at Pensacola State from 1966 until his death on May 7. He was the institution’s longest-serving faculty member ─ having spent nearly 52 years at the College.

In addition to pottery thrown by Clover, the live auction and silent auction will consist of donated original works from local and national artists like Michael Boles, the late Carl Duke, Mark Alan Francis, Krist Lien, Jimmy Rhea, Vivian Spencer, Yoko Tittel and Susan Voss to name only a few.

More than 150 pieces of artwork including 80 pieces by Clover, 40 paintings from the (Carl) Duke estate, several Murano glass items, and more will be available to the highest bidder.

Andrea Krieger, executive director of the PSC Foundation, said the goal is to raise at least $50,000 at the auction to establish the Bill Clover Endowed Scholarship fund and name the College’s pottery studio in his honor. So far, $8,000 has been placed to the endowment.

“We hope to award the first scholarships in fall 2019 to deserving visual arts students,” Krieger said. “Clover was well-loved and respected by students, community leaders and the entire Pensacola State family. We feel renaming the pottery studio and establishing a scholarship in his honor is fitting for a man who gave his heart and support in service to others.”

Interested buyers must attend the actual auction in order to bid on the premium items which will be on display on Oct. 25 and can be viewed at CloverAuction.org. The auction also will include items that appeal to every collector’s taste and budget.

Some rare objects such as two Chinese reverse glass paintings valued at $4,000, and an original copy of James A. Michener’s “The Modern Japanese Print: An Appreciation” valued at $6,900 are among the offerings.

“Items range from $30 to many thousands of dollars,” Krieger added.  “The selections are diverse in more than price, and we feel the auction has something for everyone who would like to remember Clover or to have a piece of art designed by a local artist.”

Duke, the former head of Pensacola State’s visual arts department, hired Clover in 1966 and the two became lifelong friends. Throughout their lives, the two men often exchanged and gifted each other pieces of art.

“This summer, we were notified that Mr. Duke had left a large collection of his artwork to the College – under the stipulation that it be used to help visual arts students further their education,” Krieger noted.  “When Mary Barnes, the executor of his estate, heard about this auction, she was excited to add Carl’s collection to help raise funds that could help future students pursue a career in art. We were humbled to receive the generous gift and look forward to raising funds to support PSC students.”

A Los Angeles native, Clover also volunteered at Manna Food Pantries for more than a decade – helping the charity raise nearly $300,000 during Pick A Bowl, Fill A Bowl fundraisers. In 2014, he received the U.S. President’s Volunteer Service Award for contributing 7,000-plus hours of service to Manna. He also was recognized for his work in creating more than 6,500 handcrafted bowl for the fundraisers.

Clover is survived by his wife, Kathleen; daughters, Kristen and Christi; and one granddaughter, Katie.

Individuals who wish to make a donation to honor Clover are invited to attend the Clover Memorial Auction on Oct. 25 and can call 850-484-1560 for details