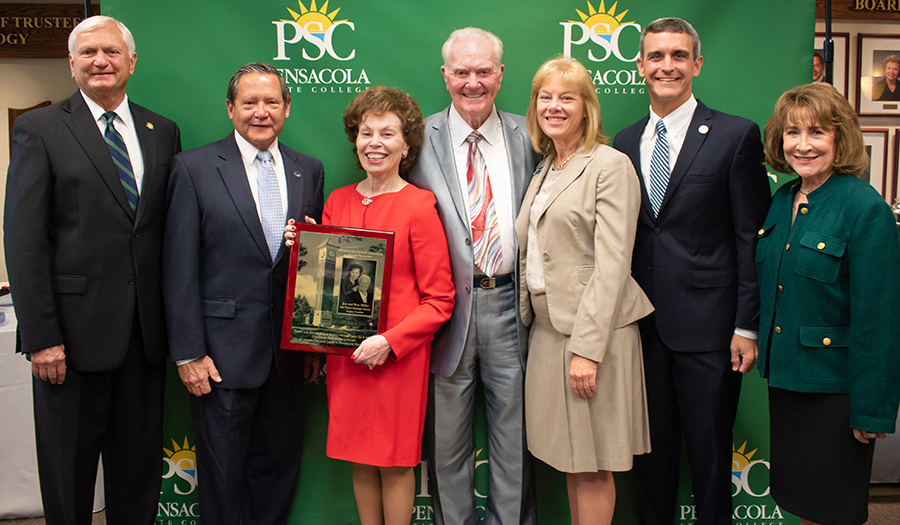 In 2018, Jan Miller – friend to the Pensacola Opera, Pace Center for Girls, Ronald McDonald House of Northwest Florida and so many other organizations – was named Philanthropist of the year by the Association of Fundraising Professionals of West Florida.

Her husband, Ron Miller, isn’t too shabby in the philanthropy arena either.

The Millers’ legacy at Pensacola State College was announced at an Oct. 28 press conference, where members of the PSC community thanked the couple for helping assist young people and future PSC students who will benefit from the trust for generations to come.

Doug Bates, PSC Foundation Board president, said that when he was a student at then-Pensacola Junior College, he never knew the impact and need for generous donors such as the Millers.

“I didn’t know what was going on – that there were people out there like you making this possible,” Bates told the Millers at the press conference Pensacola State College Pensacola campus. “But I’m sure glad that there are folks like you out there. Goodness gracious.”

The Millers sat and listened as Bates and PSC President Ed Meadows thanked them for their gift. A graceful Jan Miller smiled through much of the ceremony, but the smile disappeared for just a moment, turning instead into an expression of sincerity and earnestness as she discussed why she and her husband give so much to the community.

“When you have many blessings, it’s important to give back to the community in which you live,” Jan Miller said. “We both believe in the importance of education and are blessed to be able to do this.”

Meadows said he hopes that others in the community will take note of the Millers’ planned gift and confidence in PSC.

“Dedicated donors like the Millers give us hope that others will follow in their footsteps,” Meadows said. “While we honor them here today, we hope to send a strong message: that there are people in our community that believe in Pensacola State College and what we do for the community. The Millers’ desire to support Pensacola State is one of their many commitments to the Pensacola community.”

Meadows said the gift from the trust will be endowed and interest gained will be used to pay for scholarships. He thanked the couple on behalf of PSC, but also on behalf of “those future students” who will benefit from the generosity.
Meadows said the donation will help “future generations of students aspire to leaving poverty.”

Jan Miller said PSC’s low tuition and almost non-existent student debt makes the college a perfect recipient of such a gift and will allow future PSC students who might not have been able to attend college otherwise to take a step into higher education.

“The best way to escape poverty,” she said, “is through education.”

The Millers moved to Pensacola in the 1990s from Washington D.C. Ron Miller had previously lived in Pensacola as a child when his Navy father was stationed here.

“We’ve made Pensacola our home,” Ron Miller said. “And we want to do whatever we can to support it. We want young people who desire an education to be able to receive one.”