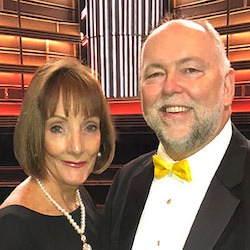 Two new endowment scholarships at Pensacola State College have been created by longtime supporters of the College.

Ret. Army Brig. Gen. John Adams and his wife, Dr. Laura Magan, along with friends Gerry and Mitzi Goldstein, have funded an endowment to provide scholarships for students in any field of study, including certificate programs.

Also, Dave and Mary Hoxeng, owners of CatCountry 98.7 and NewsRadio 1620 AM, two popular area radio stations known for community outreach and service, have established an endowment to provide scholarships for journalism students.

All six of the donors for the two new endowments have been longtime supporters and friends to the College.

“PSC has so much impact and reach in our community,” he said. “I see it all the time. You can’t meet five people in the Pensacola community without at least one having graduated from the College or who have a family member who attended PSC. It has that much reach. Look at the nursing program. You go into any of our hospitals and you’re going to see nurses who graduated from PSC. This is an opportunity for us as friends and members of the community to do something to help students reach their goals.”

The Hoxengs are well known in Pensacola for their commitment to community and have used their radio platforms to promote positive change in Pensacola. Since 2002, the Hoxengs have contributed to the President’s Circle, the Fund for Excellence, various scholarships and other PSC programs and events.

Hoxeng said the endowment that she and her husband established would help train a new generation of journalists.

“It’s a noble profession,” she said. “It’s not as glitzy as it used to be, but it’s so important. We need to be able to receive news and information that is unbiased, accurate and trustworthy. PSC is a great place for journalism students to learn and train.”