PSC receives close to $40,000 for scholarships from donations 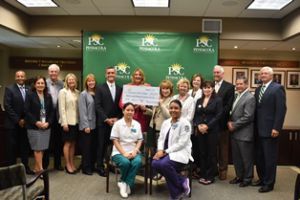 Each year, the FCS Foundation distributes hundreds of thousands of dollars to Florida’s 28 state colleges to provide scholarships to students. Florida Blue donated $12,760; the Helios Education Foundation contributed $8,979; with Bank of America giving $5,481.

Two scholarship recipients – Wei Anderson and Jessica Helloms-Poindexter – were on hand for the presentation.

Anderson, who is enrolled in the RN program, described the scholarship as a blessing.

“College tuition is very expensive but Pensacola State is helping me achieve my goals,” said Anderson who plans to eventually become a certified registered nurse anesthetist.

“I am very blessed to receive the scholarship and just want to express my gratitude to Florida Blue and the other donors.”

Helloms-Poindexter added the scholarship funds will help alleviate the stress of nursing school.

“Nursing school in itself is stressful, but not having to worry about tuition is such a relief,” said the Pensacola native who always dreamed of becoming a nurse.

As a teenager, she was enrolled in the Academy of Healthcare Professions while a Pensacola High student. Today, she works in Sacred Heart Hospital’s oncology department.

“I’ve worked in the healthcare field before but something was always missing. I realized it was because I wanted to be a nurse, and have the ability to provide compassionate care to someone in need.”

Eleven students were awarded scholarships from $7,779 donated by the Helios Education Foundation. Forty-nine students received funding from a $24,827 Florida Blue donation. And 22 students were assisted by $9,733 from Bank of America’s Dream Makers First Generation Scholars program.