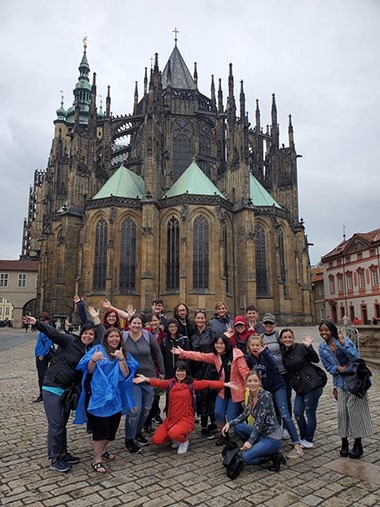 No European trip is complete without taking in some historical sights, sampling the local fare and experiencing the culture.

A group of Pensacola State College Robinson Honors Program Scholars and faculty members did all that and so much more during a May 25-June 2 tour of Prague and Berlin.

“The Central Europe Service Learning Trip had a total of 19 travelers ─ 11 Robinson Scholars along with four faculty members, one other PSC student and three community members,” said Amber Carey, the Robinson Honors Program director. “The 11 Robinson Honors Scholars were able to benefit from this cultural immersion program through travel scholarships due to the gracious sponsorship by the Robinson family.”

The Robinson Honors Program’s theme for the 2019-2020 academic year is “Life on the Fringes: Exploring Marginalized Populations,” and the delegation saw firsthand how refugees and immigrants live in the Czech Republic and Germany.

In Prague, the group visited the Prague Castle, the oldest-operating astronomical clock in existence, the 14th century Charles Bridge, St. Vitus Cathedral, the “most beautiful library in the world” at the Strahov Monastery, the Lennon Wall and the Old Jewish Quarters, Carey said.

They also completed service learning projects with Tamjdem, a group that helps people with epilepsy, and at Food Fair Club Bistro, a restaurant founded by Lela Kukava, a former refugee. Kukava only hires other refugees to work in the eatery.

“Our group cooked dishes native to the immigrants’ homelands with the former refugees, listened to their stories and dined together,” Carey said.

In Berlin, the delegation immersed themselves in the city’s history.

“We experienced cultural and historical tours of the Berlin Wall, the Jewish Holocaust Memorial, other Holocaust memorials, the site of Hitler’s Bunker, the German Parliament and Prime Minister’s buildings, Pariser Platz, the U.S. Embassy, the Brandenburg Gate, Checkpoint Charlie and the Sachsenhausen Concentration Camp,” she added.

The delegation also visited Humboldt University, the Pergamon Museum and the Neues Museum where they viewed the bust of Nefertiti and the Babylonian Gates of Ishtar ─ one of the original Seven Wonders of the World.

The trip was “an awesome and enlightening experience” for computer science major Taylor Spiegelhalter and her husband, Curt, who is also a PSC student.

“We had tour guides who showed us all of the Old World architecture and shared the histories of the cities, but we also had free time to explore. It was really a good balance – in that the free time allowed us to roam about and learn more about the cities on our own.”

She said Prague was her favorite stop because the architecture made her feel as if she was walking through a fairy tale. Spiegelhalter added the service-learning aspect of the trip was informative and educational.

“We had the opportunity to cook meals with some refugees – and actually experience their native culture and we volunteered to do some grounds keeping at a nonprofit organization in Prague – which made us feel like we were helping out.”

She said the opportunity to interact with the refugees was eye-opening.

“It really helped me put a human face and story on the refugee crisis, and it helped strengthen my political views by being able to personify these people,” she added.

“We met an Iraqi refugee who spoke to us about the war (Operation Iraqi Freedom), and my husband and I realized just how little we knew about the conflict. We’re both in our 20s and were in elementary school when the war started and was in full swing. It was never talked about or taught to us in school – but I have learned that I must take a proactive approach to find answers myself.”

“Our diverse group of people mastered the art of public transportation, calculated exchange rates in two currencies (Czech crowns and Euros), learned a few Czech and German phrases, navigated two big European cities, sampled exotic foods, and experienced breathtaking beauty in the cityscapes and deep sadness visiting the concentration camp,” Carey noted. “Through this, they formed a bond that will last a lifetime. As one student declared, ‘we’re family now.’”