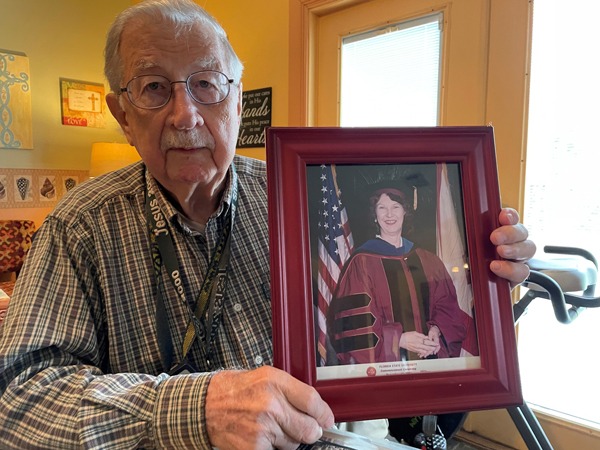 An endowed scholarship in her name will now help the next generation of educators studying at Pensacola State College.

The Dr. Sueann L. Donahue Beginning Teacher Endowed Scholarship was established in 2019. The first scholarships were awarded in spring 2021. The endowment total is $25,001.

“This was a lifetime goal for Sueann,’’ said her husband, Chuck Donahue, a former engineering technology instructor at Pensacola Junior College, which became Pensacola State College in 2010. He taught at the College from 1985 to 2002.

“Our daughter is a teacher now. It’s sort of the family business.”

Dr. Donahue never taught at PJC or PSC. But she was an alumna of the College. The Donahues’ children ─ Melissa Veith and Sean Donahue ─ also are PSC alumni.

Dr. Donahue didn’t begin her college career until her mid-30s when she began classes at PJC. She wanted to be an educator.

Her husband was in the U.S. Navy and the family lived at various duty stations across the nation, and even overseas in places such as Scotland.

“She always told me she had a natural proclivity for teaching,’’ Chuck Donahue said. “She had a high school education at the time, but she was always very intelligent and focused.”

She was involved in her children’s schools no matter ─ be it in Charleston or Scotland.

“We went to Scotland for four years and she became interested in helping develop youngsters over there,’’ Chuck Donahue recalled. “In Charleston, she started working in the school as a volunteer and all of sudden became a kindergarten teacher, even though she didn’t have a degree.”

Chuck Donahue, who served in Vietnam, received orders for Pensacola in 1975.

“The kids were grown and going to school here, so she started taking courses at PJC then,’’ he said. “She was a nontraditional student, but she was very traditional in her approach. She was very professional, no nonsense. She was there to be educated and that was her only focus.”

Dr. Donahue earned her Doctor of Philosophy in Elementary Education from FSU in 1997. She received her bachelor’s and master’s degrees from the University of West Florida.

While at FSU, she earned a reputation as a “teacher’s teacher,’’ her husband said.

“Her forte was teaching other teachers,’’ he said. “They had her going around to local schools and monitoring teachers’ progress.”

Donahue said his wife credited PSC/PJC with giving her the formal foundation to embark on her teaching career.

“She wanted to do something to give back and this scholarship helps young people to go into education at the same place she started,’’ Chuck Donahue said. “(PSC) set her on the path that she followed to great success.”

Sean Donahue said his mother could have pursued any position in education.

“She’s a lifelong educator and she’s very knowledgeable about all levels of education,’’ he noted just weeks before her passing.  “But her passion has always been children. She could teach at a university or upper level college, but it was the young children who she was really dedicated to and who she wanted to inspire.”

The Donahue family hopes that young PSC students who want to teach and inspire children apply for the scholarship.

“The spark for her was lit at PJC,’’ Chuck Donahue said. “She thought it was important to help current students who want to get into teaching. She knows that it is a profession where you can make a true difference in people’s lives.”

Contributions to the scholarship can be made online by selecting “Dr. Sueann L. Donahue Beginning Teacher Endowed Scholarship” from the drop-down menu at : https://foundation.pensacolastate.edu/opportunities-to-support-psc/scholarships/.