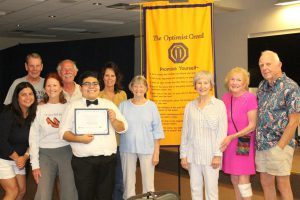 “We’re involved in anything wherever people need us.”

The words of Optimist Club of Pensacola Beach President, Bettie Lee Sundstrom rang true for one special PSC student, Enrique Viveros, as he met with members of the Club on Tuesday, October 11th.

Enrique, a recipient of the Optimist Club of Pensacola Beach Endowed Scholarship, expressed his relief and gratitude upon being notified of his award. “I was worried that I was going to have to save up to finish college and purchase tuition,” he recalled. “When I saw the scholarship from the Optimist Club, I was like ‘Wow!’ That was really generous and amazing.”

The Club has a lengthy history of support for PSC students. Its endowed scholarship, which was established in 1999, has provided students with over $54,000 in awards since 2002. The Optimist Club’s mission is to bring out the best in youth, our community, and themselves by providing hope and positive vision.

When asked about his choice to attend PSC, Enrique had this to say: “I started with dual enrollment, which exposed me to the College, and from there I really fell in love with photography and graphic design.”

Following graduation from PSC, Enrique has big plans for his future including earning his master’s degree, and possibly, becoming an Optimist himself.

If you are interested in supporting PSC students with scholarship donations, visit https://foundation.pensacolastate.edu/opportunities-to-support-psc/scholarships/ or contact Mikenzie Francis, Director of Foundation Scholarships at (850) 484-1788 or mrfrancis@pensacolastate.edu.

For more information about applying for scholarships and other forms of financial support at Pensacola State College, visit https://www.pensacolastate.edu/financial-aid/ or contact the Financial Aid Department at (850) 484-1680 or fava@pensacolastate.edu. 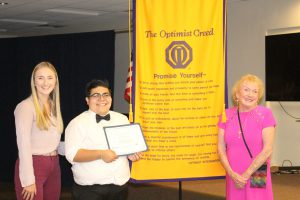