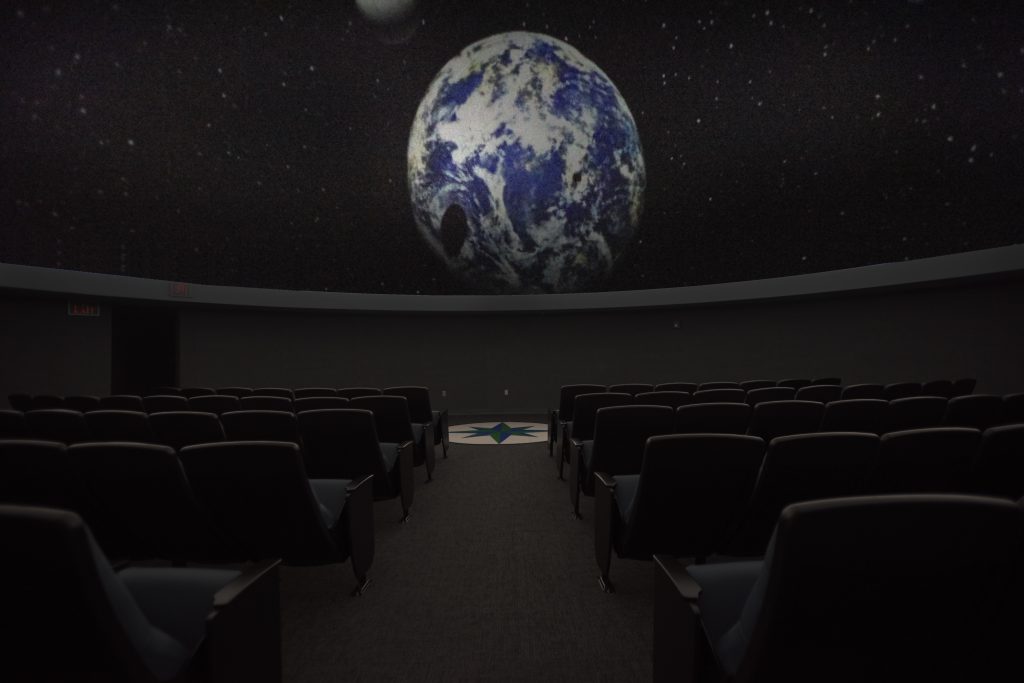 A recent facelift has taken more than 20 years off of the Pensacola State College Planetarium and Space Theater.

“The renovations to the planetarium have made it second to none. It’s pretty much a new planetarium ─ from the very top to the walls and flooring,” said Billy Jackson, the College’s planetarium specialist.

“The renovations started in 2017 with the repainting of the 40-foot diameter dome. We had to remove all of the seats and actually build the painting scaffolding inside of the planetarium – since we couldn’t get it through the curved entrance and doorway otherwise.”

Along with the dome – which was repainted by Astro-Tec Manufacturing, computerized LED lighting, a state-of-the-art surround sound system, new seating, carpeting and computerized control console were included in the upgrades.

Housed in the Baroco Center for Advanced Technology, the entire color scheme of the facility – which opened in 1993 ─ has been modernized to dark blue and gray – from the 1990s mauve.

“We even reconfigured the seating to include an aisle that will allow for more audience engagement. And the old ‘Star Trek’-design console was streamlined, and allows us to create millions of colors with the new LED lights,” Jackson added.

The planetarium’s new seats costs about $40,000 but the College’s maintenance crews performed much of the other work including rebuilding the control console. Outside contractors repainted the facility and installed new carpeting.

Pensacola State President Ed Meadows said the planetarium updates were long overdue and a great investment for the College.

“The facility attracts thousands of visitors each year – and the planetarium has long been a favorite attraction for area schoolchildren,” Meadows said. “There are very few kids in Santa Rosa County or Escambia County who have not seen a show in the planetarium. And in many cases, it may have been the first time these schoolchildren set foot on a PSC campus.”

‘”We may not have reached every school child in the two-county area but many of them – including their parents and grandparents – have experienced movies in the planetarium,” he said.

The facility also has regional appeal – the nearest other planetariums are located in Tallahassee, Montgomery and New Orleans.

“We’re conveniently located and easily accessible. We bring in students from Leon along with Okaloosa, Walton, Mobile and Baldwin counties,” Jackson said. “The farthest group we’ve had visit were students from Waynesboro, Mississippi.”

During an average academic (September-May) year, about 75 schools visit the planetarium. Overall just under 10,000 attendees view shows in the space theater each year.

This summer, the planetarium’s first show, “Dark Side of the Moon,” was shown June 17 ─ six other shows will run intermittently through July 25.

“Dark Side of the Moon” is among the planetarium most-popular shows, Jackson said. Other favorites include “Accidental Astronauts,” “From Earth to Universe” and “Perfect Little Planet.”

For more information on shows, call (850) 484-1847 Monday through Thursday or visit https://www.pensacolastate.edu/community/planetarium/. Advanced reservations are available for groups of 15 or more. All tickets must be purchased in advance at tickets.vendini.com.