Pensacola business icon Sandy Sansing has helped more than 1,100 Pensacola State College students with nearly $500,000 in financial assistance since he established the Sansing Universal Scholarship in 2002.

But as much as the financial assistance is appreciated and needed, there’s more that Sansing gives to the “Sansing Scholars.”

“The scholarships mean so much to us,” said Sansing Scholar Emily Wade, who is studying accounting at PSC. “But it’s more than that. To have someone believe in you is important. It helps you focus more on your goals and gives you that extra drive and determination.”

Wade was one of 10 Sansing Scholars from 2020 and 2021 who attended a pizza luncheon with Sansing on Monday, Oct. 18, at the PSC Pensacola campus.

Sansing inspired the scholars with bits of his own life story and shared anecdotes of determination that helped forge a strong work ethic.

He told stories of how he learned to identify the big 25-cent tippers when he was a bag boy at the long-gone Jitney Jungle supermarket on 12th Avenue. It was there he learned to recognize personality traits among the store’s customers, enabling him to interact with people from various backgrounds. He learned to value all people, not just the big tippers.

He told the Sansing Scholars of his journey from an accounting major to selling computers to finding success in the automobile industry.

“My life has been a steppingstone,” he said. “One to the other.” 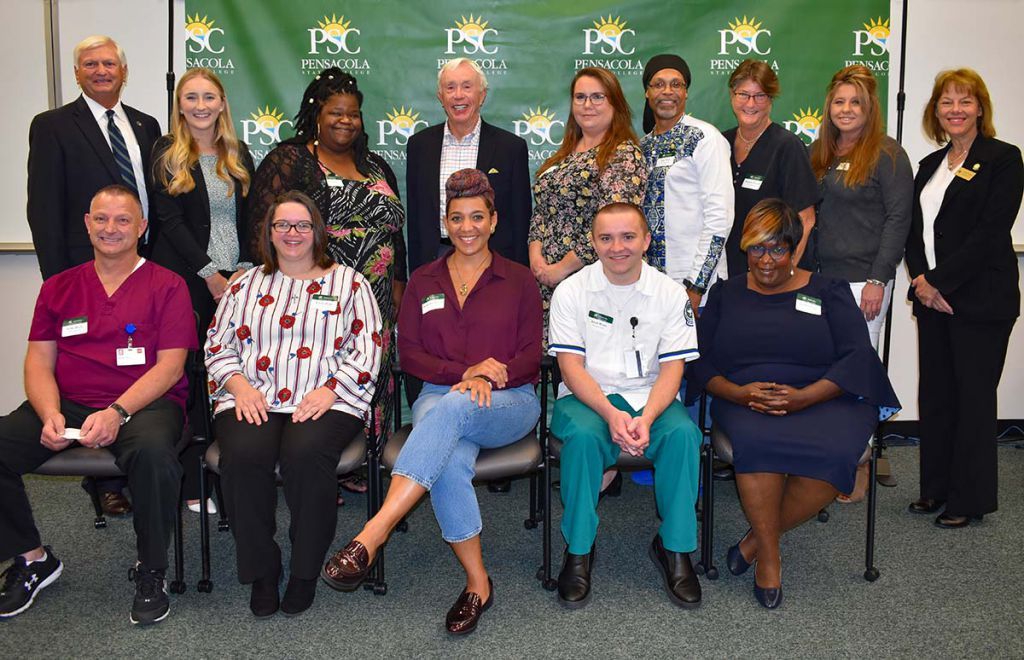 Sansing attended then-Pensacola Junior College on a golf scholarship. He graduated from the College in 1967.

“I loved PJC and I now love PSC,” Sansing said. “The professors are great, and the administration truly supports the students.”

A well-known Pensacola business icon, Sansing owns 10 automobile dealerships along the Gulf Coast. He was recognized by Time magazine in 2016 as Florida’s “Dealer of the Year” and has won the “Nissan Award of Excellence” 10 times.

Sansing’s face has been recognizable for years due to his many commercials featuring Gulf Coast locales, organizations, people and, even zoo animals. He and his family sponsor more than 55 youth baseball teams. Sansing is also a partner in the Communities Caring at Christmas program, which is among his many philanthropic ventures.

PSC President Ed Meadows said of Sansing that “he walks the talk.”

“His appreciation for this College has resulted in you being here,” Meadows told the Sansing Scholars. “Who knows, one of these days one of you might be a Sandy Sansing.”

Scholarship recipient Ariel Island said she was grateful and humbled by Sansing’s generosity.

“This is everything to me,” said the PSC Healthcare Management student. “I don’t have anyone here for me. I have no family here and I’m on my own to have someone believe in me and help me financially is a true blessing.”